HAMPTON, VA June 16, 2016 —  NASA researchers will have a front row seat to airline operations over the next five years, thanks to a newly signed partnership with American Airlines. 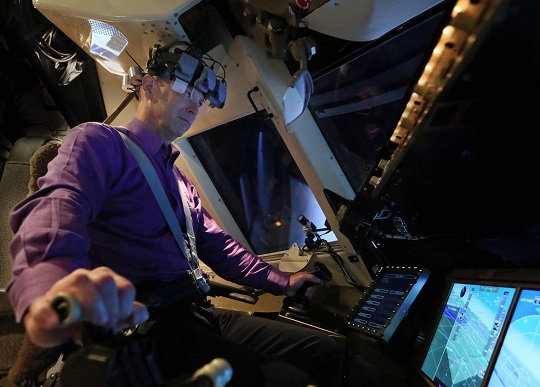 Engineers and scientists at NASA’s Langley Research Center, are looking at ways to improve flight training, cockpit displays and other flight deck operations. As a result of the agreement they will have the chance to fly as observers in the cockpit during at least a half dozen round-trip American flights each year to get firsthand knowledge of flight crew actions and reactions.

“It’s really helpful for us as researchers to see how flight crews interact with technology in real time, in real life,” said Steve Young, a senior NASA Langley researcher. “It gives us a better idea not only about how current technology works, but how designs for future flight deck systems can provide the most impact.”

NASA researchers will also be able to visit American Airlines simulators a couple of times a year to observe operations and test concepts.

NASA Langley aviation safety research is helping to improve flight simulator realism following studies by engineers of loss-of-control events, where planes ended up in unsafe orientations or other conditions, such as aerodynamic stall, that sometimes resulted in accidents.

“By partnering with Langley, American can incorporate higher simulator fidelity and provide more realism in our flight training,” said American Airlines Captain Dan Kiggins. “Making scenarios that are more challenging and more fluid provides a richer training experience for pilots, which ultimately is to the benefit for our passengers.”

“American brings tremendous assets to NASA’s research,” added Kiggins. “We have 15,000 pilots of different backgrounds who could be test subjects.”

“Professional airline pilots add real world, hands-on experience to our research,” added Young. “They have offered a number of observations and comments during tests over the years to help make our concepts better.”

NASA has a number of agreements with different airlines to help further its research.

A NASA Langley association with American — and pilot Kiggins in particular — goes back more than 15 years. Kiggins was one of a half-dozen pilots who not only tested NASA “synthetic vision” technology in simulators, but also assessed the cockpit display while flying a NASA research aircraft in Colorado in 2001.

Synthetic vision systems, which are now available commercially in part because of NASA aviation safety research and collaborations with industry, are display technologies that offer pilots an electronic picture of what’s outside their windows, no matter the weather or time of day.